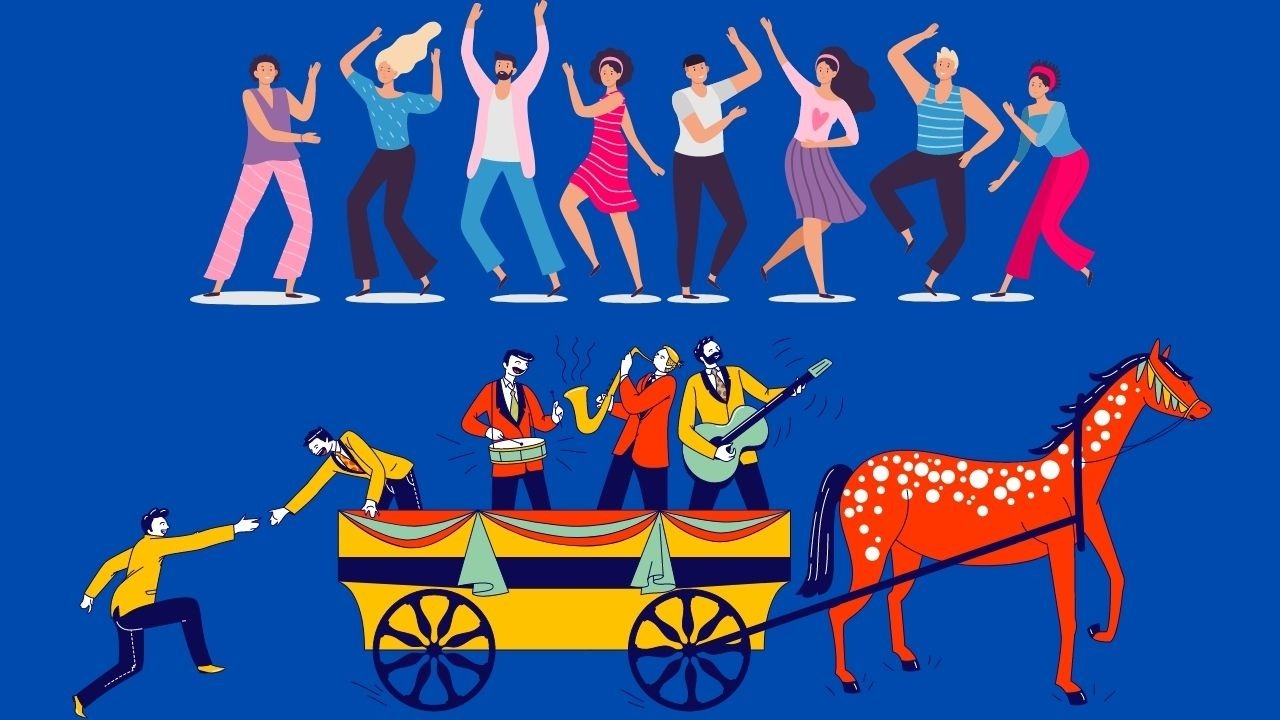 The bandwagon effect is a well-known psychological phenomenon when people do something because others do it. It often occurs in fashion trends, where people will start wearing a particular type of clothing or using a specific kind of product because it has become popular. However, the bandwagon effect can also apply in other areas of life, such as politics and business. It's something that you should be aware of because it can affect your decisions in life.

A bandwagon refers to a decorative wagon carrying a group of musicians or entertainers, usually in a parade. It also has another meaning: a popular trend.

The term "bandwagon effect" traces its roots to politics. For example, during the 1848 United States presidential election, Dan Rice campaigned for Zachary Taylor, who eventually won the election as president of the United States of America. During that time, Dan Rice campaigned while using his circus bandwagon and inviting others to join him and vote for Taylor. This event created the expression "to jump on the bandwagon," which means joining others because most or everybody else is doing it. And even today, it still happens in politics, albeit minus the literal bandwagon, and the term has spilled over to other areas of life.

There are various ways how the bandwagon effect affects our everyday lives. The following are some examples:

Why do people jump on the bandwagon?

The bandwagon effect is a psychological phenomenon that deals with groupthink behavior. There are various reasons why somebody will join in with something trending, even if it is not part of your interests or hobbies.

Is there something wrong with following the majority opinion?

Jumping on the bandwagon is not inherently wrong. It can be a fun little activity to try if you're looking for something interesting to do. If you have to make decisions over minor things like what to eat or do over the weekend, following bandwagon behaviors is okay.

The bandwagon effect becomes problematic when making significant decisions in life. You can't just follow what everybody else is doing. For example, during a presidential election, it's easy to fall into the trap of voting for whoever is the majority rooting for instead of the more qualified but less popular candidate. The future of a country is at stake here, and critical thinking plays a more important role during such times.

Jumping on the bandwagon too quickly can also make rush decisions and engage in things that may be harmful to you. The bandwagon effect mainly eliminates decision-making by having somebody follow popular trends without the individual questioning or thinking if what they will do will harm them. Life-changing decisions, such as choosing what career to take or what goals to pursue in life, should not be left according to the conclusion of others.

Should I jump in or not?

The bandwagon effect can make someone instinctively support popular beliefs. It's effortless nowadays to get pulled into something based on what we see everyone does on social media and the Internet. Ultimately, you will decide if you're going to hop in or not about something. If you have second thoughts about something trendy, take a moment to pull yourself from the frenzy. Ask yourself if the trending thing will benefit you, especially with your goals and values in life. Is it something worth it, or just a waste of time? If it contradicts your goals and values, you might be better off not hopping on the bandwagon. The bandwagon effect can also produce a reverse effect in that some people will opt to go or follow the other thing that is less popular.

The final decision over anything will always be yours. So if you feel pressured about something, don't just go quickly adopting whatever you have doubts about doing or following. Instead, practice some good decision-making and weigh how a particular bandwagon plays a role in your life. For amusement purposes, the bandwagon effect is mostly okay. However, you might be better off jumping on a different vehicle for more significant and extensive decisions in your life.